For the start of our journey with TcpStream we'll take a look at what it takes to send and receive raw bytes.

This demo is going to build up some concepts that result in a demo found here. The working concept is that we want to have a client send some data (a String) to a server that will echo the message back to the client. In further demos, we'll progress this concept to do slightly more interesting things with the data on the server before sending back.

Let's start with our client and figuring out how to send the message bytes (String characters) to the server. TcpStream's implementation of the Write trait gives us functionality to write data to the stream (allowing TCP to send bytes across the wire).

The write() method takes a slice of bytes (&[u8]) and attempts to queue them in the TcpStream's buffer (without sending on the wire yet) and returns the number of bytes successfully written as a usize. If more bytes are written than can be buffered, write() signals this with a usize less than the length of bytes sent (which you can see with the bytes_written variable in examples coming soon).

After queuing the bytes in the TCP buffer, flush() signals to TCP that it should send the bytes. As the last bytes are sent, the PSH bit will be set to signal to the receiving TCP stack that this data is ready to send to the application.

To prevent missing data, the bytes_written should be validated and signaled if not all the data could be written, which could look like this:

Validating the bytes queued is a common enough pattern to warrant a dedicated method to save us some work: write_all(). A simplified version of the example above becomes:

This is what the the TcpStream looks like in Wireshark. Notice the PSH bit set on the packet 5 (carrying the data segment "Hello"): 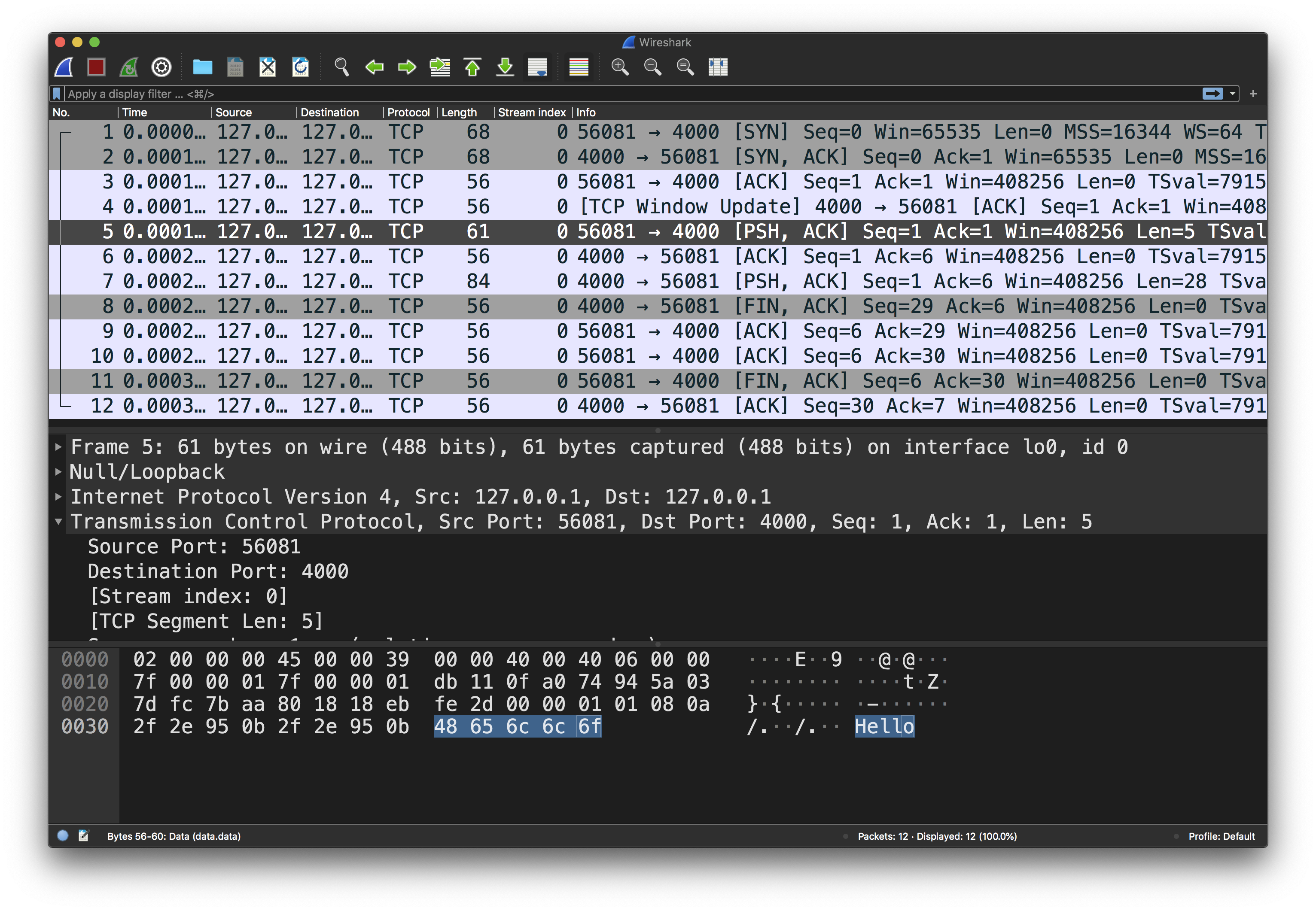 Counterpart to the Write trait's write()/write_all(), the Read trait gives us read() for the ability to read received bytes from a TcpStream. It can be a bit more nuanced than Write and I'll show you why you'll tend to want to use the BufRead trait with BufReader.

The read() method takes a mutable reference (&mut) to a buffer (like a Vec<u8> or [u8]) and will attempt to fill this buffer with received bytes. The nuanced side of read() is knowing how many bytes to read, as reading to a growable array will cause an error since it can't be filled:

So, knowing how many bytes to read would be easy if we knew that the messages received are always a fixed size:

Yet we live in a world with variable length strings and the approach above doesn't quite work out. However read() returns a usize of bytes_read, so we can get fancy reading to our statically sized array repeatedly until we have no more bytes to read:

Alas, there are some issues with this code. Each time read() is called can be a syscall to fetch bytes from the TCP stack and we're also stuck with the decision of how to size the fixed length array:

Fortunately though there's a solution for us...

The BufRead trait and BufReader give us some really convenient read capabilities:

Instead of repeatedly trying to fill an array with bytes, BufRead offers a fill_buf() method which returns a slice to all the bytes in the buffer, super convenient!

fill_buf() does not free/drop the bytes read; a subsequent call to consume() is necessary to tell the BufReader that the bytes were successfully read and it can move its internal cursor. This combo is helpful in the case where TCP may not have received all the data yet, and your code needs to check for a delimiter (cough like a newline cough) or certain number of bytes:

We've covered how to read and write bytes with TcpStream but it could be easier for us. The next article will expand on the usage of BufRead to build a Lines Codec to abstract away the read/write detail in the client and server code.